The co-founders of global engineering company Renishaw plc, Sir David McMurtry and John Deer, have been honoured with the prestigious Swan Medal of the Institute of Physics, which annually recognises contributions to the organisation or application of physics in an industrial or commercial context.

The co-founders of global engineering company Renishaw plc, Sir David McMurtry and John Deer, have been honoured with the prestigious Swan Medal of the Institute of Physics, which annually recognises contributions to the organisation or application of physics in an industrial or commercial context. The medal, which will be presented at a special ceremony in October, is named in honour of Sir Joseph Swan who was a British physicist and chemist most famous for the invention of the incandescent light bulb.

This year's Swan Medal citation recognises Sir David, Renishaw's Chairman and Chief Executive, and John Deer, Deputy Chairman, ‘For their role in founding Renishaw plc and leading it to become one of the world's principal manufacturers of metrology equipment.” It also describes that the company was established in 1973 ‘to manufacture and sell sensor technology that had been developed by McMurtry for the accurate dimensional measurements necessary to assess variations in high precision component manufacturing.' 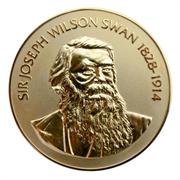 The citation also notes that ‘Given the fundamental importance of positional and dimensional measurement the company subsequently found many opportunities to expand into sectors as diverse as machine tool automation, machine calibration, motion control, spectroscopy and surgical robotics in the intervening period. This was achieved through a significant and consistent commitment to research and development.'

Speaking about the award, Ben Taylor, Renishaw's Assistant Chief Executive, says, “We feel extremely proud of Sir David and John, who are modest men that have created a highly successful global company based on their founding principles of innovation, high quality manufacturing and excellent customer support. I am especially pleased for John, whose vital role in the success of the business is not always recognised externally. This includes his work to establish the early overseas subsidiary network and his initiation of our highly regarded apprenticeship and undergraduate development programmes which have provided us with large numbers of talented engineers.”

Originally initiated in 2008 as the Business and Innovation Medal, but for 2012 onward renamed the Swan Medal of the Institute of Physics, past winners include Dr Graham Batey of Oxford Instruments NanoScience, Professor Sir Michael Pepper of University College London, and Professor Sir Richard Friend and Dr David Fyfe of Cambridge University.

The Institute of Physics is a leading scientific society with a worldwide membership of around 40,000 comprising physicists from all sectors, as well as those with an interest in physics. It works to advance physics research, application and education; and engages with policymakers and the public to develop awareness and understanding of physics.