Track cycling is a fast-paced sport, with racers reaching speeds of up to 60 miles per hour. Racers are often less than a second apart, so racing teams require high quality, lightweight and aerodynamic bikes to give them a competitive edge. When Hope Technology and Lotus Engineering began developing an innovative, lightweight track bike for the Great Britain Olympic cycling team, British Cycling approached global engineering technologies company, Renishaw, for its AM expertise. 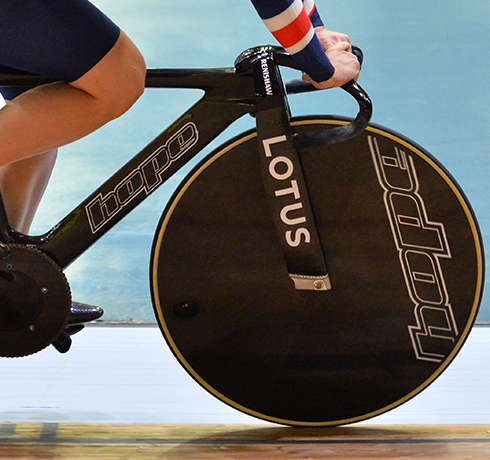 British Cycling is the national governing body in Great Britain for cycling, as recognised by the Union Cycliste Internationale (UCI). It includes eight disciplines of cycling - BMX Freestyle, BMX Racing, Cross Country Mountain Bike, Downhill Mountain Bike, Cyclo-cross, Road and Track, and Cycle Speedway. The track event includes 21 athletes who race around a 250-metre Olympic velodrome track, with banks of varying degrees that can rise to around 42 degrees, enabling them to maintain high speeds.

Aerodynamics is a significant factor when engineering bikes for track racing. Aerodynamic bikes reduce the power that the cyclists have to exert to remain at a constant or increasing speed, by decreasing the drag force and allowing the air to flow smoothly over the front of the cyclist and bike. Olympic cycling athletes can reach speeds of around 60 miles per hour when racing in the velodrome, which drastically increases the air resistance they experience.

Lotus Engineering, designers of the iconic 108 and 110 bikes ridden by Olympic gold medallist, Chris Boardman, in the 1990s, collaborated with cycling component manufacturer, Hope Technology, to build the HB.T. As part of the project, Lotus and Hope wanted to improve the bike's speed to help the Great Britain Cycling Team improve its performances and push for medals.

When you do something new and brave you have lots of difficulties to overcome and that is where Renishaw has been fantastic. The Renishaw team has worked with the engineers to do the refinement at break-neck speed, in the past it would take months to go from the drawing board to a piece that you could try in the test rig or in the velodrome and now we can do it in weeks.

To ensure the new bike was as aerodynamic as possible, Lotus Engineering and Hope Technology made constant adaptations during the design phase. Each design change needed to be submitted to the UCI, creating a time lag that meant there was not enough time to produce moulds for the carbon fibre frames, handlebars and forks. As a result, small design changes could take months to manufacture and test when using carbon fibre manufacturing methods.

Most velodrome bikes have carbon handlebars to help improve aerodynamics, reduce weight, dampen vibrations and increase stiffness to maximise handling precision. To produce carbon handlebars, manufacturers need to create a mould to the shape of the current design and then start manufacturing the handlebars. Small changes to the design mean this process has to be repeated multiple times before any parts are manufactured, increasing the time lag from design change to testing. 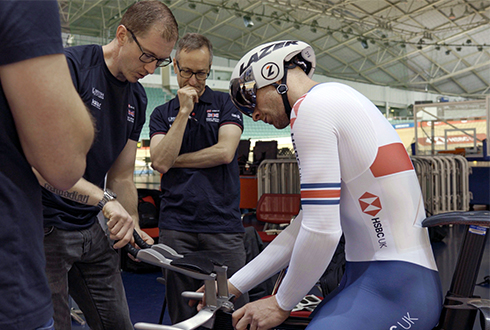 Before undertaking this project with the Great Britain Cycling Team, Renishaw already had significant experience in the use of 3D printing for bicycle manufacture. It has worked closely with extreme mountain bike manufacturer, Atherton; produced components for the ARION4 project team that achieved the male and female world record speeds for hand cycling in 2018; and in 2013 produced the world's first metal 3D printed bike frame for mountain bike manufacturer, Empire Cycles, an achievement that was recognised by Guinness World Records.

"Renishaw joined the Olympic track bike project in 2019 and became involved in the design for manufacture stage," explained Ben Collins Design/Development Engineer at Renishaw. "By implementing additive manufacturing (AM) into the design and prototyping stage, our team was able to quickly manufacture the design changes, so the aerodynamic capabilities of the design could be tested. Ensuring the design was light, geometrically correct and strong enough to endure the strain from the riders was a constant balancing act, so many iterations were created to find the ideal balance."

"Additive manufacturing does not require any bespoke tooling, such as casting moulds, which are specific to each job," continued Collins. "During the prototyping stage, we are creating one-off batches, which can be carried out much faster by using AM technology, compared to more traditional casting methods."

The development of the new track bike reflects our aspiration to be the world leaders in innovation and aerodynamics. It has been an impressive collaborative effort with our partners to produce a research-backed and courageously innovative track bike.

Renishaw initially used its AM expertise to rapidly produce plastic and metal prototype parts to undertake aerodynamic testing of the new design and ensure that parts were light, geometrically correct and strong enough to endure the strain from riders. After proof of concept, the company then used its own RenAM 500Q AM systems to additively manufacture aluminium and titanium parts, including handlebars, for the competition bikes, with parts customised for individual athletes.

Renishaw helped Lotus and Hope use AM to produce a carbon fibre design for the bike's frame that improved its aerodynamics, such as a fork with a flared profile to minimise drag. Renishaw's engineering and AM knowledge also allowed Hope and Lotus to achieve a speedy production process with an improved design turnaround.

“The development of the new track bike reflects our aspiration to be the world leaders in innovation and aerodynamics,” commented Stephen Park OBE, Performance Director for the Great Britain Cycling Team. “It has been an impressive collaborative effort with our partners to produce a research-backed and courageously innovative track bike.”

“The world is embracing the rapid development cycle and additive manufacturing is probably the biggest single step,” commented Tony Purnell, former Head of Technology for the Great Britain Cycling Team.

“It's a dream team of engineering prowess. Hope Technology brings high quality manufacturing standards and Lotus Engineering is renowned for lightweight design and outstanding aerodynamic efficiency,” continued Purnell. “Both supported and advised by additive manufacturing experts Renishaw, who has ensured that Lotus and Hope have access to the most modern and fastest turnaround process from design to usable pieces.”

“Your bike just becomes an extension of your body, and you get used to how it feels and how it sounds. It's unusual that you get on a completely different bike and straight away it feels better,” commented Ed Clancy OBE, Triple Olympic Cycling Gold Medalist.

“It was exciting to see Renishaw's additive manufacturing expertise play a pivotal part in Great Britain's push for Olympic gold medals at Tokyo,” explained Ben Collins, Renishaw's AM Design/Development Engineer. “The team won three gold medals, three silver and one bronze, which was a brilliant achievement for the cyclists and a great showcase for the benefits of additive manufacturing.”

At Tokyo 2020, the HB.T bikes also helped to make British Olympic history. Laura Kenny became the most successful British female Olympian of all time after winning a gold medal in the Madison with Katie Archibald, and silver medal in the women's team pursuit. Jason Kenny also became Britain's most successful Olympian ever, winning gold in the men's keirin and silver in the men's team sprint.